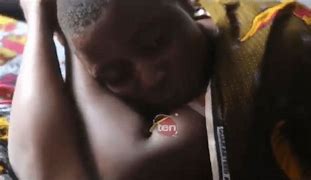 A 27-year-old woman shocked her neighbours who woke up on Sunday morning to the news of her delivering a chicken-like creature.

Her 52-year-old husband is said to have rushed her to the hospital after she complained of labour pains.

She was then admitted to the labour ward where nurses were thrown into utter surprise after she gave birth to the strange creature.

Chief Inspector of Kigoma, James Manyama, addressing the media said the strange creature will remain under police custody awaiting an examination in a Government laboratory.

“This woman did not show any signs of having a pregnancy that was out of the ordinary. The creature that came out of her did not look like it came from her uterus.

“Though she looked pregnant, unconfirmed reports say that the creature was entered into her by a witch doctor. We are still investigating with the authorities to get to the bottom of the matter,” said the officer.

Man sets lover, pastor on fire after catching them in bed