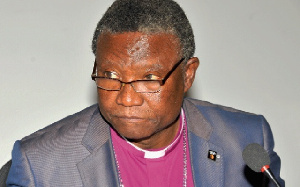 Former Chairman of the National Peace Council, Most Rev. Emmanuel Asante, has said while the opposition National Democratic Congress (NDC) can disagree with the results declared by the Electoral Commission (EC) in the recent elections, its actions must not destabilise the peace of the country.

The comments by the immediate past Chairman of the Council follows the NDC’s allegations that the December 7 elections have been stolen for the incumbent New Patriotic Party (NPP).

The NDC presidential candidate, John Dramani Mahama, has said the party has evidence that the polls were rigged and would soon take steps to reverse EC’s declaration of Nana Akufo-Addo as President.

There have, however, been numerous demonstrations in parts of the country by supporters of the opposition party in protest of the alleged rigged elections.

Commenting on the impasse that has ensued over the election results, Most Rev Asante urged the NDC to seek redress in Court instead of urging its members to protest on the streets.

“Former President Mahama and the NDC are saying they will not accept the results of the election, there is nothing wrong with that. They have every right to express their views, but they do not have the right to compromise the peace of this country in expressing their views.

“If they feel strongly that they have been given a raw deal, they should rather take the legal path to seek redress,” he is quoted in a report by Myjoyonline.

According to him, NDC’s refusal to go to court to seek redress is not consistent with the tenets of the Peace Pact signed by former President Mahama and President-elect, Nana Addo Dankwa Akufo-Addo, before the start of the polls.

“I am waiting to see that they take that step rather than hitting the streets, burning tyres, and inciting people to match to different places to demand what they consider to be their right,” he stated.

2020 Polls: Mahama reveals what will make him concede defeat

Anas Ready With Secret Video About The 2020 Election”