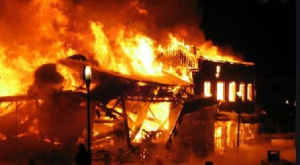 Fire has ravaged at least three shops in Koforidua, the Eastern Regional Capital of the country.

The incident occurred around 10:15 am on Tuesday.

The blaze was reportedly caused by an electrical fault on the main power supply pole of Electricity Company of Ghana which spread to the nearby shops.

Though firefighters arrived late at the scene they managed to extinguish the fire preventing it from spreading to other nearby shops.

The shops consumed by the fire sold electricals, plastics and cloths.

Properties worth thousands of Ghana Cedis have been destroyed.

A worker at Ogyeatuo Electrical shop told Starr News that he managed to disconnect the power supply to the shop however the other two shops were not open at the time hence the fire started there and spread to the electrical shop.