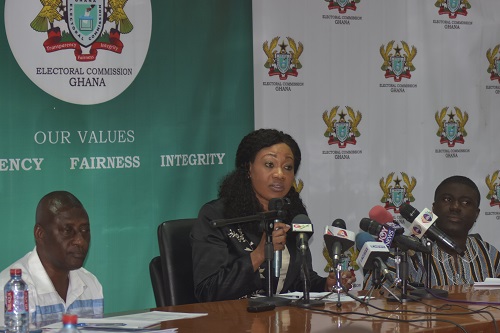 The Herald reports that there was confusion at an emergency meeting at the headquarters of the Electoral Commission (EC) over the miscalculations that have been recorded after the Presidential elections.

Details are sketchy but the paper is informed that the meeting started at 2pm with confusion and blame game was on the failure of the IT department headed EC IT Consultant, Dr. Yaw-Ofori-Adjei.

The department was accused of feeding Jean Mensa with wrong numbers ahead of delivery.

The discussion was said to have revealed that the IT department knew that the software used to collate the results was faulty and had been churning out wrong numbers.

The faulty software is said to be responsible for the changes that have been recorded on the presidential results since its declaration, last Wednesday.

In the meeting, are all the commissioners, directors and other executives of the EC.

It is unclear what the outcome of meeting will be.

The Herald’s information was that to prevent such situation, Dr. Kwadwo Afari had in his administration, a first class mathematician David Adeenze Kanga, as one of his deputies.

He helped with calculations and other others with respect to numbers, hence such embarrassing occurrences never happened.

It is unclear if the EC has any such a personality with a degree of maturity of Mr. Kanga.

The NDC candidate John Dramani Mahama, has announced he is not accepting the result.

Mr. Mahama’s supporters are in the street alleging a stolen verdict from and fictionalized results.

Anas Ready With Secret Video About The 2020 Election”