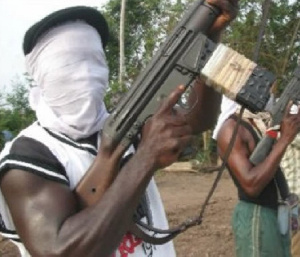 Police investigators confirm to MyNewsGh.com that two of the robbers armed with pump-action guns first attacked the colleague Security men at their security post.

They tied their hands, legs and mouth with a sellotape and woolen strings and two of them holding the guns stood guard on them whilst the other three who were not armed but were with different types of implements managed to break one of the windows open and entered into the banking hall.

It is gathered that the robbers after operating for about two hours left the banking premises. One of the security guards however managed to untie himself to seek help

The police were thereafter notified about the incident but upon visiting the scene, they detected that the robbers caused damage to one of the banking hall sliding window and its burglar proof to gain ingress into the banking hall.

Further damages were caused to two inner doors of the bank before reaching the strong room which was well fortified with specialised metal door.

The robbers with a wall cutter cut through the wall creating a hole into the strong room. They also cut the iron bars of the gate of the Vault thereby taking away an amount of GHC93,445.45.

The robbers caused damage to two CCTV cameras, disconnected the CCTV server and took away the CCTV Recorder and Alarm Panel.

Meanwhile, the two victims who have no physical injuries on them have been issued with Police Medical Report form to attend hospital for a checkup

Source: My News GH
Related Topics:ARMEDmen
Up Next