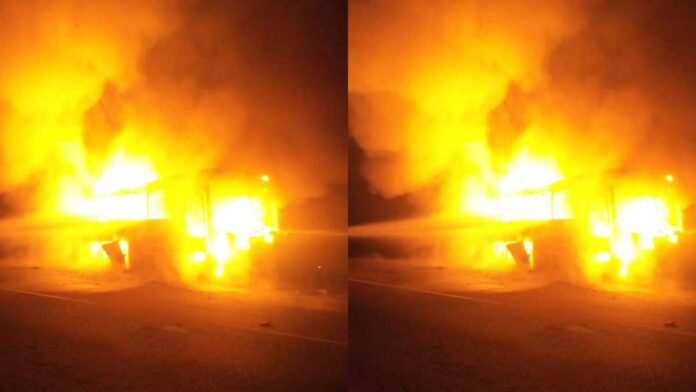 A 32-year-old man has caused a stir for killing his uncle and setting the body and the deceased’s house ablaze.

The incidents which took place at Aboatem in the Bosomtwe District of Ashanti, on Thursday at about 11 p.m., was perpetrated by Richard Yeboah, who set the entire house on fire.

By the time personnel of the Ghana National Fire Service arrived, the body had been burnt beyond recognition and the three-bedroom house was blazing.

But for the timely arrival of the police team, Yeboah would have been killed by the townfolks who had subjected him to severe beatings,
According to the Bosomtwe District Police Commander, Deputy Superintendent of Police (DSP) Eric Akwaboa, Yeboah was rushed to the Komfo Anokye Teaching Hospital (KATH), where he is receiving treatment under police guard.

DSP Akwaboa indicated that Yeboah was found in a pool of blood in front of the house when the police arrived at the scene.

He said Yeboah set fire to the mattress of the uncle, Michael Ebo Mensah, and locked the door, leaving him to die in the flames.

“After that, he armed himself with a machete and dared anyone to go to the rescue of the uncle, who was heard shouting for help,” DSP Akwaboa hinted.

He said the youth of the town were attracted to the scene and managed to overpower him and, “I believe he was badly beaten as he was unconscious and lying in a pool of blood at the time we found him.”

The police commander noted that when the fire subsided, the body of Mr Mensah was found in the room, adding that it had been deposited at the KATH mortuary.

According to him, reports indicated there had been uneasy calm between Yeboah and the uncle, who had been complaining about his nephew’s reckless drinking habit.

DSP Akwaboa said the two did not live together, but on that fateful day, Yeboah picked a quarrel with his uncle in town, who then left for his house.

At about 11 p.m., Yeboah rushed to the house and attacked the uncle in his room, resulting in the tragedy.

The Assembly Member of the area, Arnold Afriyie, corroborated the information that the occupants of the house initially mistook the incident for the usual fracas that ensued between the two, until they came out to see the thick smoke coming from Mensah’s room.