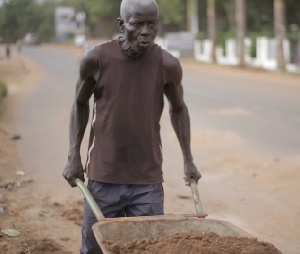 Abraham Ackom is a 63-year old who resides at Lakeside in Accra. He believes as citizens, we must help the government/MP with development. This he believes can be done in many ways but Abraham’s way is by filling potholes in his neighbourhood.

“Coconut is what I sell but I figured filling potholes would be better because the government/MP can’t do it all. The MP Maybe busy with something else so helping to develop the country is not a bad idea.

After selling coconut, I pick up a shovel and mix the sand with stones then fill the potholes here. Some people give me money while others praise me for my good work,” Abraham said told DJ Nyaami on SVTV Africa.

He, however, stated that it is not a job and hence doesn’t expect to be paid by anyone. His business is selling coconut, though some drivers give him money as they drive past him.

Abraham seems a hard working man as he been to Nigeria seeking greener pastures some decades ago.

Please check out the video below;

[VIDEO]: Men take advantage of me due to my situation – Woman shares plight