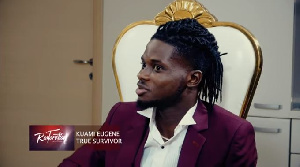 Highlife musician Kuami Eugene tells the story of how his irredeemable stubbornness pushed his father to abandon his responsibilities and vow not to invest even GH¢1 in him again.

The now popular musician in his interview on ‘Restoration With Stacy’ recalls he was very stubborn to the extent that even the entrenched position of the father could cause a change in narrative.

He reveals that his mother, unlike the father, kept grooming him, hoping for reforms. Although he understands why his father took that decision, his love for his mother is indescribable and keeps soaring but same cannot be said about his father.

The musician known for hailing his mother on every occasion says, “She means a lot to me. I owe her whoever I am today. She had to go through a lot to put me here and I had to learn a lot from her. The difference between my mum and myself is she had to strive without money. I got the opportunity to get close to certain people who helped to get me on a higher ground.”

“I saw her hustle. She had to make sure I had the best schooling, she nursed me well. She did some proper nurturing. My dad was around… My mum would make everything possible.

“She went to her friends to borrow GH¢1000 so I could write my final exams. She had to do four jobs a day to make things happen. We were four kids. With my other siblings, my dad was supporting but he wasn’t supporting me. He stopped supporting me when I was in JHS because I’m not the kind he thought would bring something better home.

“He thought it’d be my other siblings. The whole family was clever but it looked like I was clever but had gone to chase something else. I’m too stubborn… My dad lost hope in me when I was very young. I was like 13. He told my mum he was tired and won’t invest even GHc1 in me.”

Regardless, his father is proud of him for the success he [Eugene] has chalked in music so far.

“My dad is the one enjoying. He’s taking all the fans,” he says.

Watch the interview below.

PHOTOS: This Is Why Serwaa Amihere Is Trending On Twitter With Hajia Bintu