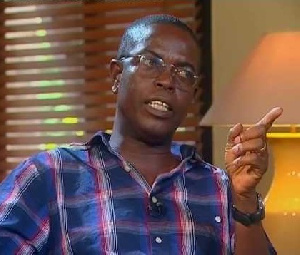 ‘I have always hated mathematics but my mathematics is better than the EC chair’, Kwesi Pratt said as he took on the Electoral Commission over the errors in the figures announced by the Chairperson of the commission at the declaration of the 2020 Presidential election results.

The EC has come under attacks after it admitted to having made some mistakes in the total number of valid votes cast.

“The total valid votes cast is 13,119,460. This does not change the percentages stated for each candidate and the declaration made by the Chairperson,” the EC said in the statement issued Thursday, December 10, 2020.

Addressing the issue on Pan African TV, Kwesi Pratt expressed dismay over how such a gaffe could be committed by the election organization body.

The veteran journalist criticized the commission and its chairperson for rushing to declare results of the elections.

He laughed off the EC claims that the new figure which has over 300,000 votes more than the old figure does not change the percentages it earlier gave the candidates.

“The Chairperson of the EC is saying that the figure they declared is 300,000 more than the real figure. 300,000 votes in this contested election is not small votes and she is saying that in spite of these new numbers, the percentages are the same”, Pratt said amid laughter.

Pratt is not the only public figure unhappy with the development. Franklin Cudjoe, the president of IMANI Africa chided the EC for not only being ‘incompetent’ but also being ‘corrupt’.

“I really couldn’t believe that the EC kept changing figures on its website after admitting making basic math errors. I have now concluded that is not only incompetent, it is very corrupt!!” Mr Cudjoe tweeted.