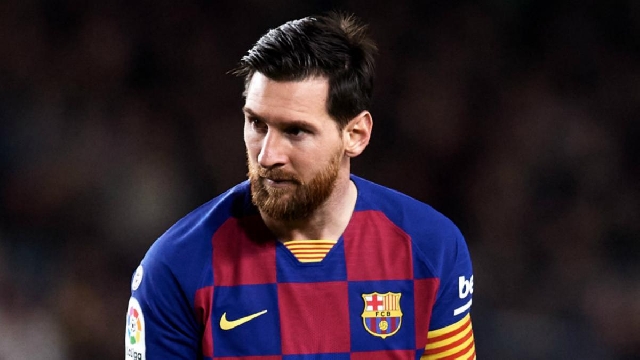 The Ghanaian international – who is Bayern Munich defender Jerome Boateng’s half-brother – spent part of the 2018-19 season at the Nou Camp.

Given Messi’s contract expires next summer, he can leave Barcelona on a free transfer, with foreign clubs able to start contract negotiations from January.

And ex-Tottenham, Portsmouth and AC Milan attacking midfielder Boateng believes a switch to Naples would be a fairytale end to Messi’s career.

He told ESPN: ‘Messi should go to Napoli after his contract with Barca expires in June 2021.

‘He could say, I would like to honour Maradona’s No 10 and go and play a year or two at Naples, without thinking about money, but the heart.

‘It would be like a movie. He would have to go training by helicopter because people would eat him alive and he would be very happy.’

Messi’s future has been subject to intense debate, with reports suggesting the 33-year-old is unsettled at the club after protracted but failed attempts to leave the club last summer.

The Argentinean attempted to exit Barcelona this summer, infamously informing the hierarchy of his desire to depart by Burofax before changing his mind to avoid legal proceedings against ‘the club of his life’.

That discontent has spilt onto the pitch, with Ronald Koeman’s side currently ninth in LaLiga, only three points off the relegation zone.

Barcelona are also struggling financially and his half-million-a-week deal off the wage bill would ease the pressure on the club’s finances.

If he did move into Napoli, he would likely inherit Diego Maradona’s iconic No 10 shirt in the city where his compatriot passed into legend.