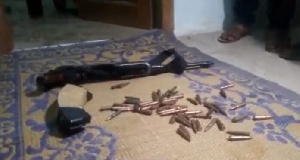 A team of Police and Military officers have retrieved an AK47 rifle loaded with 50 rounds of ammunition from the office of the National Democratic Congress(NDC) Member of Parliament-elect for Savelugu in the Northern Region, Alhaji Iddris Yakubu Abdulai Wednesday evening.

According to the Northern Regional Police Commander, COP Timothy Yoosa Bonga, they picked intelligence that there were guns in a house that also housed the campaign office of the MP-elect.

He said the police then followed the lead to the said house where a search was conducted where an AK47 rifle loaded with 40 rounds of ammunition was found. The police then proceeded to search the office of the MP-elect which was locked at the time.

However, when the police called Alhaji Yakubu Iddris Abdulai on phone to come over and open his office for a search he’s said to have declined the invitation, saying his life is in danger hence can not come over.

The Police who had already found a gun in the house did not want to leave anything to chance but as they were left with no option, they broke into the office to conduct the search only to find another AK47 rifle loaded with 50 rounds of ammunition.

The police after the first search in the house arrested three people – Mohammed Fedila (female) 27 years, Alhassan Dauda, 38, and Dogu Na, Chief of Dogu who have since been remanded by a court and are to reappear on 17th December 2020.

The police say they will once again invite the MP-elect to help with investigation, a failure which he will be arrested.

Reports say while supporters of Alhaji Iddris Yakubu Abdulai jubilated over his victory on Tuesday night there were gunshots at his office which killed a 12-year-old child and left several others injured.