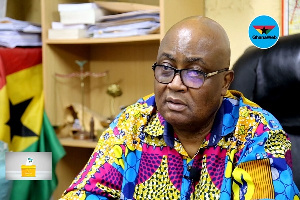 Flagbearer of the National Democratic Congress (NDC) and Former President John Dramani Mahama made his ‘defiant’ statement about the just-ended Presidential and Parliamentary elections because he may have been misinformed by the leadership of his party, Pollster and Managing Editor of the Daily Dispatch Newspaper Mr Benjamin Emmanuel Ephson has said.

“I think that he may have been misinformed. He was obviously misinformed because if you look at the situation, I’m sure he would have been briefed by now,” he told GBC’s radio in an interview monitored by MyNewsGh.com.

Mr Ephson’s comment comes as a response to some statements made by the Former President during the 2020 elections which suggested that his party was winning the election and that they were not going to accept any stealing of ballot by the Electoral Commission.

“We thank the Ghanaian people for the confidence they’ve expressed in us. It’s clear the Ghanaian people want a change in this country. Ghanaians are tired of Akufo-Addo’s government. We thank you for giving us the majority in parliament 140 seats in Parliament and no attempt should be made to subvert the will of the people,” Mr Mahama said a day after the election when the EC had not declared the elections result and was still collating.

According to him, after looking at the results the party had collated at the time, he was convinced and happy with the outcome.

“We have won ten regions out of 16”, he said, “we will resist any attempt to subvert the will of the people”, he added.

“I want to state categorically and firmly that I have not congratulated any person. And no attempt should be made to steal this election, we will resist it”, Former President John Dramani Mahama said when news had it that he had finally conceded defeat.

But pollster Ben Ephson speaking to the state broadcaster revealed that, if the Former President had known the gap was that huge, he wouldn’t have made such a comment.

“From the gap, it wasn’t like a runoff margin of 40,000 votes so the Former President wouldn’t have, made such statement if he was aware of the figures coming”