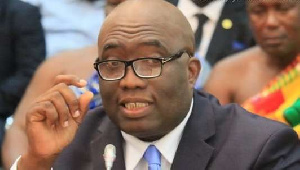 Even before Nana Addo Dankwa Akufo-Addo starts his second term as President, Ghanaian lawyer, academic and politician Joe Gharteyhave disclosed his intentions to contest for presidency in 2024.

Nana Addo Dankwa Akufo-Addo will not be eligible to contest for another election in Ghana after his second term as President which will end in 2024.

After the 2020 elections, party footsoldiers of the NPP have tipped the Vice President Dr. Mahamudu Bawumia as the direct replacement for Nana Addo Dankwa Akufo-Addo and have called on the leadership of the party to ensure this.

But Hon. Joe Ghartey who is the Member of Parliament for Essikado Ketan Constituency has given a clear indication that he will contest for the Presidential primaries of the New Patriotic Party (NPP).

“Chief there’s only one truth, I contested for the last election and I came third, Akufo-Addo came first and Kyeremanteng came second and I was third. 2024 if God permits I will stand for the President of Ghana,” he said while reacting to a report that ranked his popularity in the New Patriotic Party.