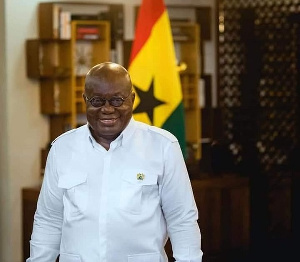 Aggrieved New Patriotic Party (NPP) members in the Kpone-Katamanso Constituency of the Greater Accra Region want President Akufo-Addo to immediately sack their Municipal Chief Executive (MCE), Solomon Appiah Tetteh, accusing him of sabotaging the parliamentary ambitions of the NPP Parliamentary Candidate for the area in the just ended presidential and parliamentary elections.

Solomon Appiah Tetteh, according to the constituency executives, polling station executives and some loyal groups accused the MCE of “clandestine schemes and open campaigns” against Mr. Hopeson Yaovi Adorye which resulted in his defeat in the just ended parliamentary elections.

The NDC candidate, Joseph Akuerteh Tetteh beat Hopeson Adorye with 51,755 representing 55.33% of the votes against Hopeson’s 39546 which represented 42.27% of the votes.

Wielding placards with inscriptions such as ‘Solomon Tetteh is a political vampire, Mr. President, sack him,’ ‘Solomon Tetteh must go, no compromise, not negotiable,’ ‘God will punish you Solomon Appiah Tetteh, your evil work will follow you,’ etc. the demonstrators who converged at the party’s constituency office at Kpone Wednesday morning to register their protest called on the president to axe the Assembly Chief without delay for his surreptitious campaign against the interest of the party.

Spokesperson for the group, Operations Director of the Kpone Katamanso NPP Campaign Team and former Parliamentary Aspirant, Prince Dadzie said this on its behalf.

“We are by this statement bringing to the fore of the President how the MCE, Mr Solomon Appiah Tetteh clandestinely schemed and publicly campaigned against the interest of the party and its Parliamentary Candidate,” a vociferous prince dadzie said.

“His parochial and egoistic interests have gravely caused the vanquish of our parliamentary seat and by this singular act of irresponsibility, we indulge the president to exercise his prerogative to expel him from that respected position.”