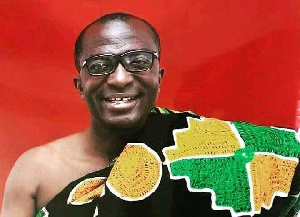 General Secretary for the New Patriotic Party(NPP) John Boadu says the Member of Parliament(MP)-elect for Fomena in the Ashanti region can choose to apply for membership of the party if he wants to.

The former Member of Parliament (MP) for Fomena Lawyer Andrews Asiamah Amoakoh was suspended by the New Patriotic Party(NPP) after he decided to contest this year’s election as an Independent candidate.

Subsequently, he was removed from his seat in Parliament because he has forfeited his New Patriotic Party Membership.

But Lawyer Andrew Asiamah stood his grounds and principles regardless and contested for the seat with utmost optimism and won convincingly.

Speaking to Accra-based Citi FM, John Boaduwho is the New Patriotic Party’s (NPP) said the National Executive Committee is the only body that can decide on the fate of the Member of Parliament.

He indicated that Andrew Asiamah Amoakoh has severally mentioned that he belongs to the New Patriotic Party (NPP) and therefore if he’s interested in joining the party, he should apply so that he will be taken through the process.

“If he says he wants to join the party he should apply so that we take him through the process,” he said.

Source: My News GH
Related Topics:NPP
Up Next