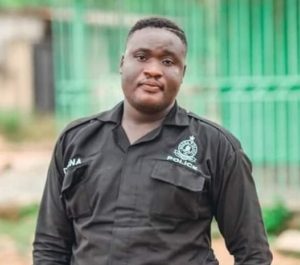 Constable Senanu Davordzie a Policeman has accidentally shot himself leading to his death.

According to the Police,  Davordzie had just returned from night duty at the Takoradi Market Circle Branch of Ecobank where he was on guard.

The Policeman upon reaching the charge office where he was going to hand over his rifle fell off his motorbike.

The fall triggered his rifle which discharged two bullets into his abdomen and although he was rushed to the hospital in Takoradi, he was pronounced dead on arrival.

His body has been deposited at the Takoradi Hospital morgue pending autopsy.