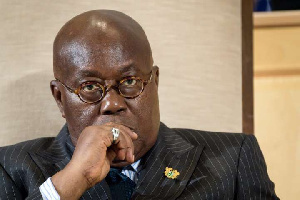 An economist and Chief Executive Officer (CEO) of Kowns Estate, Kofi Anokye says the outcome of the 2020 polls has shown that President Nana Addo Dankwa Akufo-Addo is the worst performing president in Ghana’s history.

He said for a government that used the Free Senior High School to campaign for more votes but ended-up reducing their performance compared to 2016, is an indication that he has failed.

To him, this is a testament that the New Patriotic Party (NPP) bagged all its hopes in the Free SHS without focusing on other areas.

He has therefore warned the government that they should review their policy direction because the Free SHS debate will no longer be significant going forward.

“This should teach them a lesson because Nana Addo has been saved by the bell. When you use the history of elections in Ghana, Nana Addo performed poorly. A government seeking a second term should not struggle as Nana Addo did. Kufour’s second term bid was smooth and so easy because Ghanaians appreciated him. Nana Addo was saved by the bell. The number of parliamentarians for the NPP was impressive in 2016 but in 2020, he struggled to get MPs and this should teach them lessons.”

Mr. Kofi Anokye advised the NPP to sit down and evaluate their performance for the 2020 polls and learn from it.

Meanwhile, he has described the performance of former President John Dramani Mahama as impressive.

He said for a candidate who was voted out four years ago only to come back with an impressive performance, it means that he has been endorsed.

He asked him to accept defeat in good faith as Ghanaians have endorsed him despite losing the polls.

‘Sack our MCE, he preached skirt and blouse’ – Kpone Katamanso NPP to Akufo-Addo