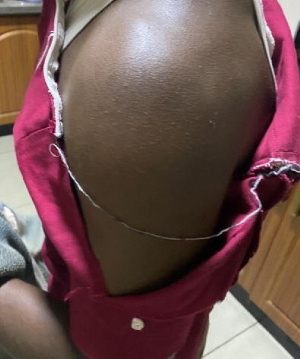 Two reporters of GhanaWeb were attacked by irate youth who are believed to be supporters of the National Democratic Congress at the party’s headquarters.

The head of GhanaWeb’s political desk Laud Adu Asare and videographer Sandra Obiribea survived by the skin of their teeth as the unruly supporters assaulted them as they tried to find their way to the party’s conference room for a scheduled press conference.

A traumatized Laud Adu Asare had his shirt torn with bruises on his left arm from the assault.

But for the intervention of a kind-hearted individual, the worse would have happened to Sandra Obiribea.

The gentleman who is a member of the NDC’s media team spotted the two and the impending danger and shielded Sandra from the knife-wielding hooligans.

The video journalist missed a knife wound that was meant for her as the party’s media person who was trying to shield her, unfortunately, took the cut from an angry knife-wielding man. The incident left some bloodstains from the wound on her blouse.

As a result of this despicable and reprehensible act by these thugs, the management of GhanaWeb has taken a decision to boycott every party activity until the issue is resolved and the affected parties are apologised to.

Meanwhile, the two victims are receiving medical and psychological help. The case has also been reported to the police.

Source: www.ghanaweb.com
Related Topics:Ghanawebreporters
Up Next