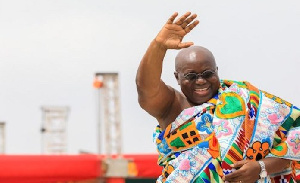 Just after the Electoral Commissioner, Jean Mensa declared the flagbearer of the New Patriotic Party, Nana Addo Dankwa Akufo-Addoas the president-elect for the Republic of Ghana, social media has erupted in sending congratulatory messages to him.

President Akufo-Addo has retained his seat after a keen contest in the general elections held on December 7, 2020.

Some of the messages that were poured in include for Akufo-Addo read, “Congratulations a million times to you H.E @NAkufoAddo. Indeed The Battle was and still the Lord’s. #Nana Toaso”

Congratulations to His Excellency, Nana Addo Dankwa Akufo-Addo@NAkufoAddo for a renewed mandate by the Ghanaian people. Ayekoo! #4More4Nana#Election2020resultspic.twitter.com/L6JyHoK9lm

Source: www.ghanaweb.com
Related Topics:addocongratulateGhanaiansNana
Up Next

Should These Factories be Revamped, I Shall Join 31 Akufo-Addo’s Government – GUM Leader Declares