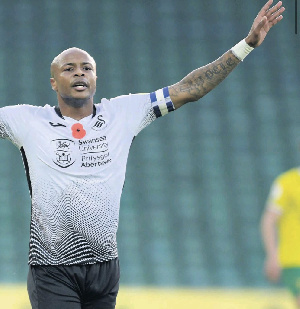 Ghana captain Andre Ayew’s goal against Sheffield Wednesday has been adjudged as the Swansea City’s Westacres Goal of the Month for November.

The 30-year-old grabbed the equalizer for the Jack Army on the hour mark when he curled a left-footed effort from inside the box following a pass from Connor Roberts.

It was his sixth goal of the campaign for Swansea City in that game.

Ayew had two of his goals, one against Brentford and Sheffield Wednesday nominated for the award whilst  Connor Roberts’ brave header against Nottingham Forest and Chloe Chivers’ fantastic long-range strike for Swansea City Ladies against Cardiff Met were all selected.

The fans voted for the goal scored by the Swansea City star to win the award.

Andre Ayew has been impressive for the Welsh club this season and has scored seven goals in 16 appearances for the club.

Swansea City is hoping to clinch promotion to the Premier League and currently placed fourth on the league log with 30 points.