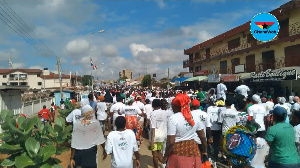 Rumours spreading in the camp of the opposition National Democratic Congress (NDC) that a delegation from the Peace Council intends to visit John Dramani Mahama has forced some supporters of the party to throng the residence of their party leader.

GhanaWeb’s reporter, George Ayisi, who has been at the party headquarters in Accra on Wednesday reports that party supporters believe the visit by the Peace Council is to get John Mahama to concede defeat to President Nana Addo Dankwa Akufo-Addo.

“The rumour at the party’s headquarters is that a delegation from the National Peace Council has been sent to the residence of the opposition party leader and the former President to concede defeat and because of that they are mobilising supporters here to go the party leader’s residence,” George reports.

The NDC supporters believe their leader has won the elections and so they are heading to his residence to prevent him from conceding, George reports from the Adabraka headquarters of the NDC.

Meanwhile, the Electoral Commission has released the results from seven regions.

The Chairperson of the EC, Jean Mensa, announced at a press conference that the Commission has received presidential results from fourteen of the sixteen regions.

She stated at a press conference held on Wednesday, December 9, 2020, that they are currently working to certify the remaining seven regional results her outfit has obtained.

Jean Mensa also added that Commission is yet to receive election results from the Northern and the Bono East Regions.

“As we speak, the Commission has received 14 out of the 16 regional results. We have the national collation centre where we have had representatives of the various political parties since yesterday. As the results come in, the party representatives review them against what they themselves have received from the regions and once they are satisfied that the results that have come to us from the regions are a true reflection of what they have received, they then append their signatures to it before the results are brought to my attention. As returning officer of the 2020 presidential election, I then certify these results. Out of the 14 results received, we have certified seven up to date”, she said.

SHOCKING VIDEO: Cars Moving Around Without Drivers In Hohoe After Peter Amewu’s Victory