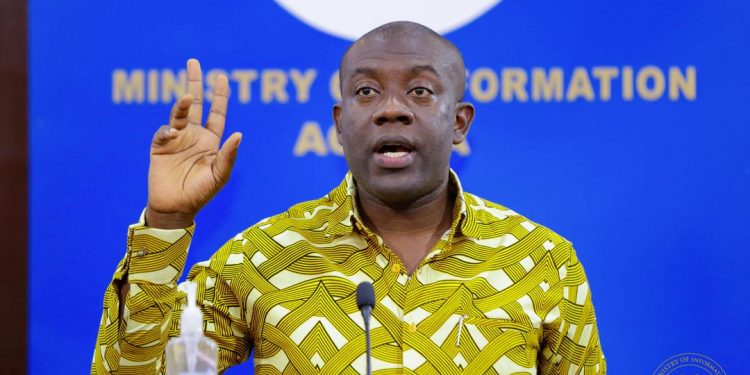 Kojo Oppong Nkrumah, the Minister of Information has in no uncertain terms condemned John Dramani Mahama’s claim that he is the winner of the 2020 presidential elections.

Oppong Nkrumah revealed his fury with the claims by the NDC’s flagbearer at a press conference held on Tuesday, December 8, 2020.

Oppong Nkrumah accused John Mahama of inciting the public against the Electoral Commission which he reckons threatens the peace and security of the country.

The Ofoase-Ayirebi MP is unhappy John Mahama, who signed the peace pact, is acting in ways that betray the agreement he signed.

“After signing this, we have candidate Mahama himself asking his supporters to have the right to jubilate which is a dog whistle for them to jubilate. We want to as a government of Ghana strongly urge all candidates to desist from such conduct. It has the potential to raise tensions, to heighten anxiety and most importantly it will lead your supporters to be severely disappointed if and when an eventual loss is occasioned for you. And so we think the responsible thing to do as a government is at this point in time call it out and let the public know not to fall for it,” Mr Nkrumah added.

John Dramani at a press conference credited himself and his party with winning the December polls.

The former president said that the NDC has won the elections and will not sit aloof for the government to alter the results.

“It is clear the Ghanaian people want a change in this country. Ghanaians are tired of Akufo-Addo and his government. We’ve won in 10 regions out of 16 and Ghanaians have expressed their confidence in us.”

“We will resist any attempt to subvert the will of the people” as he accused the government of using military personnel to intimidate persons in areas favourable to the NDC.”

“Some of what is happening is unacceptable and Nana Akufo-Addo continues to show credentials that are undemocratic. You cannot use the military to overturn the results in constituencies that we have won, and so we will resist any attempt to subvert the sovereign will of the people,” he said.