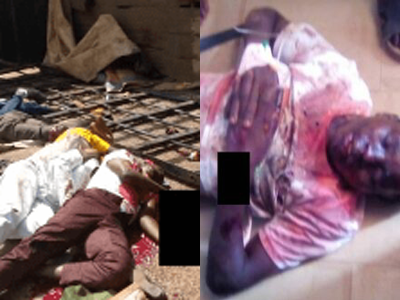 One more person has died in an accident involving some supporters of the opposition National Democratic Congress (NDC) bringing the death toll to seven.

The victim, Yussif Alhassan, aged 25, died shortly after he was rushed to the Sekyedumase Government Hospital for treatment.

Six others died at the spot. They have been identified as Vampire Tayomi, 40, Kwabena Bolasson aged 32, Isahaku Begpo, 43 and Ibrahim Muhammed, aged 30.

The rest is 43-year-old Suleman Dagomgba and Yussif Fusseini aged 46.

The truck with registration number AS 2145 G was conveying supporters of the main opposition party to a nearby town where flag bearer John Mahama is expected to address a mammoth rally as part of his campaign tour of the ruling party’s stronghold.

Footage obtained by dailymailgh.com shows the overturned vehicle on one side of the road, near the Aframso cemetery while the victims, which include women, lying on the other bleeding profusely in pain.

Emergency services were deployed to the scene as they race with time to rescue the perishing, some locals who rushed to the scene told dailymailgh.com.

“The injured are at the Ejura Government Hospital receiving treatment”, a victim who wished not to be named said.

“There are fears the death toll could rise, it is a terrible scene”, the victim stated in an earlier interview.

The Ashanti Regional Police Command also confirmed the news to dailymailgh.com. It said five persons died at the scene.

“Some are in critical condition. Our men are on the ground to convey the deceased to the morgue”, said Ashanti Regional Commander of the Motor Traffic Transport Unit Superintendent Emmanuel Adu Boahene in an earlier interview with dailymailgh.com.

It remains unclear what caused the accident. Bodies of the deceased have been deposited at the St. Theresa’s Hospital at Nkoranza for autopsy.

The NDC flagbearer John Mahama has since visited surviving victims who are receiving treatment at separate hospitals.

NDC supporters mass up at Police Headquarters over padlock