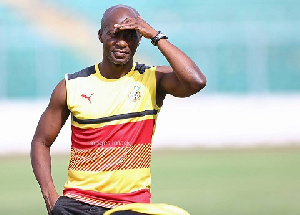 Barjaktarevic, 51, was sacked on Saturday following Cities’ uninspiring start to the 2020/21 Ghana Premier League season especially the 3-0 humbling at the hands of Great Olympics.

According to Ghana Sports Online sources, Cities are eager to fill the void created by the departure of the head coach and have already engaged Ibrahim Tanko in a negotiation to take over as the next head coach.

Tanko is seen as the ideal candidate to drive Cities to their destiny and the hierarchy at the club believe the former Borussia Dortmund striker’s impressive coaching CV fits their bill.

Tanko was assistant coach of Cameroon at the 2014 FIFA World Cup and has also worked as assistant manager of Bundesliga sides FC Cologne and Freiburg.

He was rumoured to be heading to Hearts of Oak but the rumours failed to materialised as the Phobians maintained Edward Odoom as the head coach of the club.