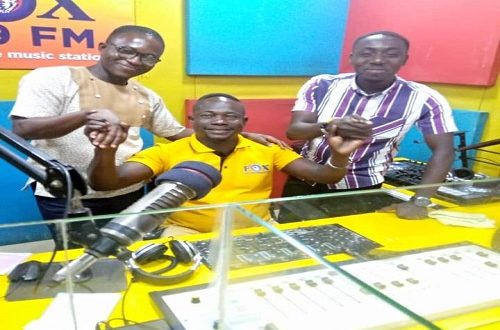 Fox FM’s has lost an iconic presenter after 15 years of great intimacy.

Frank Taylor is rumoured to have quit the radio station to a different media house in Kumasi.

Frank Taylor aka “Maa Pooh”  has been spotted on Facebook post which shows the likelihood of the “All time radio legend”  Frankie Taylor moving to a different media house after working with Fox FM for more than 15 years.

The picture attached to the post portrays Frankie Taylor on a seat in-between Sir John and Nana Quame Afriyie both of Akoma FM in Kumasi.

However, the big question everyone is asking is that, “Which Radio Station is Maa Pooh going to work with?”

Previous NDC supporters mass up at Police Headquarters over padlock
Next PHOTOS: Sad moments as Prof Benneh is laid to rest