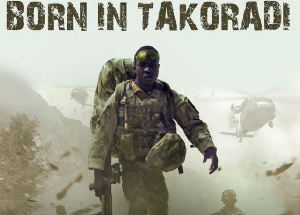 Sergeant Jonathan Biney, a Ghanaian-born British army officer, has been awarded as the Army Military Communicator of the Year 2020.

Sergeant Biney was handed the recognition following his exploits on social media, particularly Instagram, where he uses his platform to give people insightful tips and glimpses into the activities of the ‘modern-day British soldier’.

A publication on the British Army website praises Sergeant Biney who belongs to the 7 Regiment Royal Logistic Corps as someone who uses his personal social media account to project the British Army.

He is said to have “proved himself to be an authentic and outstanding ambassador, giving enthralling insight into some of the other tasks the military has been engaged on around the world.”

Sergeant Biney who hails from the Western Regional capital of Takoradi realized a childhood dream when he was enlisted into the British Army as a chef in 2009.

He has for the past eleven years worked his way up in the ranks and is now Sergeant with deployment to over ten countries.

Sergeant Biney, according to a publication on British Army site, has been deployed to Afghanistan, Cyprus and Kenya where he is currently based at the British Army Training Unit.

The award was presented to the Ghanaian-born soldier by the Lord Mayor of the City of London, William Russell during a virtual event.

Sergeant Biden expressed excitement with the recognition and said he was proud with the progress he has made over the last eleven years.

“I am so happy to have received this. I am really proud of my Army life and the opportunities and rewards I have gained. My transformation from basic training where I didn’t know anyone, to having so many friends and comrades and the advice I have been given along the way, I just want to pass that on. I signed on for 24 years’ service, I’ve completed 11 years and I can’t wait for the next phase of my career and being able to share it with everyone.”