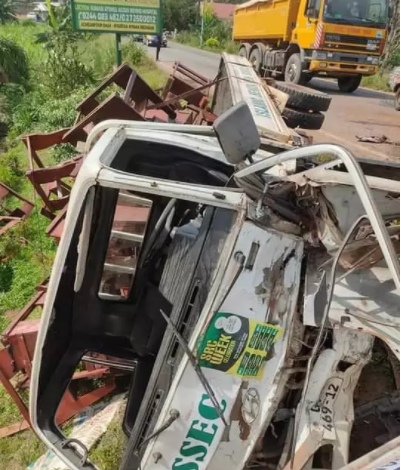 Residents of Ahinsan Estates at Ahinsan in the Kumasi Metropolis of the Ashanti Region were not given peace as two drivers lost total control of their cars and ended the lives of many others. Ahinsan Estate is a community of its own at Ahinsan. It dates back to the late 1970 when the now Ghana State Housing Corporation bought it from the Asante King and decided to use it as a residential place for all government workers been stationed at the region.

It has inhabitants of over 5000 residents outside that of Ahinsan. It’s roads connects with all routes in and out of the Kumasi Metropolis. Two cars, one truck and one private lost control and crashed leaving at least five in critical condition and others dead. Eye witness recounts that, the truck which was carrying chairs supposed to be for pupils of basic school at Ahinsan lost its brakes when it was descending the slope out of the estate.

The private salon car which was coming from Kumasi was entering the estate when suddenly the truck crashed it with maximum speed. According to passerby who rescued the victims, the salon driver did its best to maneuver the truck but since the truck was a huge truck and on full speed with failed brakes, the salon driver couldn’t succeed in its course.

All victims involved had been sent to the McKenzie Hospital at Ahinsan whiles the seriously injured ones are on their way to the Komfo Anokye Teaching Hospital for immediate medical treatment. Traffic has been standstill as police tries to drag the two cars of the road to ease the traffic.