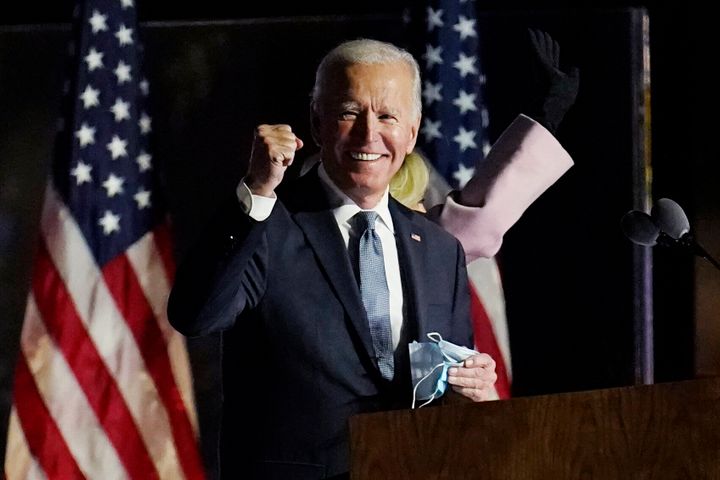 The Biden campaign said Thursday morning that it believes “victory is imminent,” as it wrote on a slide in a video briefing.

“Our data shows that Joe Biden will be the next president of the United States,” campaign manager Jen O’Malley Dillon said.

Trump’s path to a second term has become increasingly narrow. To hold on to the White House, he would need to win Georgia, Nevada, North Carolina and Pennsylvania. In only one of those states — North Carolina — does he appear strongly favored to win.

Biden, on the other hand, can secure the electoral votes to win the presidency in numerous ways: A victory in Pennsylvania would put him over the top, as would wins in any of the two other remaining states.

The current Electoral College tally is complicated by the fact that news outlets have not agreed on whether to call Arizona. The AP, which HuffPost relies on for its projected results, and Fox News called Arizona for Biden on election night. However, some outlets still have not done so. It’s possible that Biden will get to 270 votes per AP projections without a formal concession from the Trump campaign or an end to legal challenges.

Subscribe to the Politics email.
From Washington to the campaign trail, get the latest politics news.

In a call with reporters on Thursday morning, Trump campaign officials pointed out that data journalist Nate Silver, who founded the FiveThirtyEight website, has publicly disagreed with the decision to call Arizona for Biden.

“The race in Arizona is getting closer and closer every day,” Trump campaign manager Bill Stepien said.

The Trump campaign, as it warned it would, has filed multiple legal challenges in swing states. In Michigan and Pennsylvania, the campaign wants election officials to stop counting ballots until it receives “meaningful” access to ballot-counting sites and a review of ballots already counted, according to the AP. And in Georgia, the campaign is demanding that state law regarding absentee ballots be followed.

As Pennsylvania vote tallies began to stack up for Biden, Trump tweeted “STOP THE COUNT!” on Thursday morning.

However, the Trump campaign has also said its chances of victory depend on more ballots being counted. The campaign said on a call with reporters Thursday morning that it expects that yet-to-be-counted votes in Pennsylvania, Arizona and Georgia could ultimately decide those states in the president’s favor.

Campaign official Jason Miller said Trump’s tweet on Thursday morning was only referring to “illegal” ballots, such as those mailed after Election Day.

“What the president is pointing out is something that we have driven here at the campaign and reiterated time and time again: that these states and localities should not be counting ballots that are mailed in or magically appeared in a sack of ballots after Election Day,” Miller said.

Miller’s comments are part of a broader strategy by the Trump campaign to baselessly suggest that the election has been the subject of illegal fraud and tampering.

Campaign officials on Thursday again referenced unspecified claims of voter fraud that they had received from across Pennsylvania. Prior to Election Day, however, the only Pennsylvanian formally charged with election fraud was a registered Republican and Trump supporter in Luzerne County who allegedly tried to send in an absentee ballot for his dead mother.

The campaign also sought to discredit Pennsylvania Secretary of State Kathy Boockvar, the Democrat overseeing the administration of elections in the state, because of a critical remark she made about Trump in 2017.

“She is a partisan hack running elections in Pennsylvania, and she is a disgrace,” Trump campaign attorney Justin Clark said.

On Thursday’s call with reporters, Trump campaign officials celebrated a ruling from a Pennsylvania judge that forces the city of Philadelphia to permit both campaigns to observe ballot-counting, provided they adhere to public health guidelines such as social distancing.

“We’re going to demand that we’re able to review all the things that they’ve done to date,” Clark said. “This is typical ― it’s typical of left-wing political machines in these big cities that are trying to steal a vote from the duly elected president.”

Biden, meanwhile, has urged Americans to be patient and wait for officials to complete their counts.