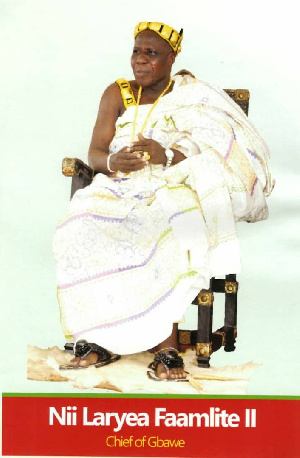 The chief died on Wednesday, October 14, 2020, the secretary of the family announced at a press conference held today, November 5, 2020.

Solomon Nii Afutu Quartey announced that in line with customs, red flags will be erected in the principal streets of Gbawe.

He also disclosed that a book of condolence has been opened for mourners and sympathizers.

He added that burial and final funeral rites will be announced at a later date.

Nii Laryea Faamlite II according to family records was enstooled as chief of Gbawe in 1994.

Policeman beats barber to pulp for ‘wooing’ his daughter