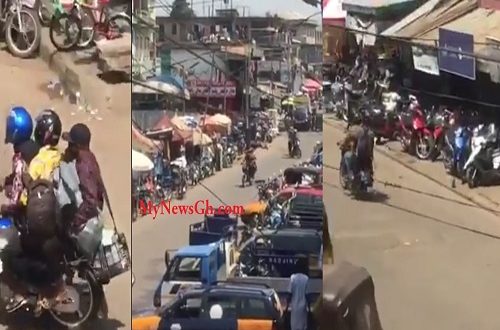 The robbers numbering about seven on three different motorbikes are seen in the less than a one minute video firing at different directions as they fled from the robbery scene.

The first motorbike is seen carrying two pillion riders with one holding what is believed to be the money snatched from the businessman who had gone to withdraw the cash from the bank.

Both ends of the road are blocked as they brandish their guns to the shock of the traders some of whom are also seen fleeing for their lives and abandoning their wares in the process.

It is gathered that three persons who were shot in the process are currently receiving treatment at Manhyia Government Hospital.

The robbers on Friday afternoon left traders running for their lives as they stormed Alabar  firing gunshots sporadically after snatching huge cash from a businessman who was just coming out of a bank in the area.