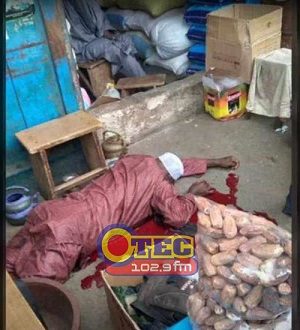 The incident which happened on Friday, October 30, 2020, around 12 noon, saw five suspected armed robbers wielding guns indiscriminately shooting in the air to disperse the crowd.

According to eyewitnesses who spoke to Otec News’ Isaac Nsiah Foster, the robbers were riding on two motor bikes, wielding AK-47 rifles and short guns.

“When they got down from their bikes, they first shot number of rounds into the air and then shot those people when they refused to hand over their money to them when they were asked to,” the eyewitness said.

The fifth person, a Muslim, who survived the shooting after been shot twice at a close range, is said to have ‘bulletproof’ charm that protected him from bullets penetration.

The three other victims are receiving medical treatment at the Manhyia Government Hosptial, while the dead people have been deposited at the mortuary.

Three of the suspected criminals have been arrested by the Ashanti Regional Police Command after a shooting battle at Santasi roundabout at 1 pm the same day.

Otec News’ reporter, Akwasi Acheampong, told the host of ‘Asem Beba Dabi’, Krobea Nana Yaw Asante on Friday that a large crowd besieged the Central Police Station at Adum, where the suspects were held, calling out for their blood.