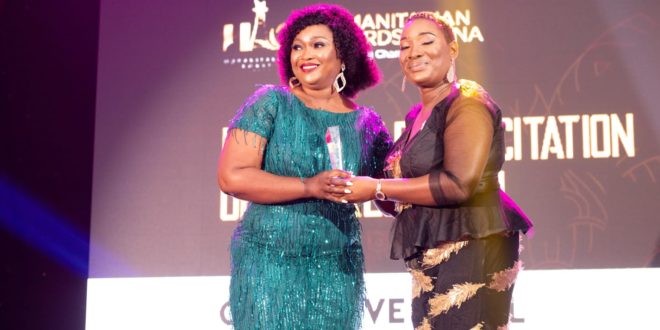 Nyirammah foundation, an NGO has been awarded the best woman in philanthropy for the year 2020 by the Humanitarian Awards Ghana for their outstanding role in supporting and improving the lives of people especially women and children in less privileged communities.

Speaking in an interview on the sidelines after the event, the CEO of the foundation, Nana Adwoa Tutuwaa  said despite the challenges facing NGO’S across the globe particularly in Ghana, they continue to play very important role in the lives of humanity.

She therefore advised people not to relent in their effort in supporting charitable organisations to enable them to continuously assist the needy.

She stated ‘’There are still people out there who still have some perception about NGO’s not living up to expectations but enriching themselves at the expense of the needy. But there are a good number of them doing the right thing and putting smiles on the faces of people in society.

I have still remained relevant over the years as a result of the love and passion for the work. It is a God given mandate which makes me restless if I fail to meet the needs of people when the need arises’’ she stated

Having been awarded by GOWA as shero of the year and also as woman in philanthropy both in 2019 by the national philanthropy excellence award, she expressed her excitement and commitment to continue to support humanity irrespective of the numerous challenges confronting them.

She appealed to stakeholders corporate bodies and individuals to extend a helping hand to NGO’S in their effort to create meaningful lives for the less privileged in society.

When asked why she has been supporting women and children,  Adwoa Tutuwaa  said  due to the  important role mothers play in the socioeconomic development of the country especially in raising children even in challenging times, the foundation decided to make children  and women  priority.

She said’’ Mothers we believe would do everything to ensure they take care of their children We realized that there are mothers who need little assistance to  “ I see that when women are supported financially, empowered to be independent minded, it goes a long way to help the family even if the father is not in a capacity to help.

It even addresses marital challenges such as divorce, brings peace and harmony at home

Nhyramma Foundation which started five years ago is rural-community driven and has been supporting children, mothers  by paying their school fees, providing educational needs, shelter and financial support for them to work with.

Aside supporting less-privileged mothers and children in deprived communities by supporting them in diverse ways, the Foundation has also established a business venture in Accra to support enable them expand their scope of operations to all parts of the country.

She commended the organisers for their role in recognizing the work of NGO’S in Ghana and appealed to Individuals, corporate bodies, stakeholders among others to extand a hand to the needy in society to help meet the needs of children who are the future of the country.

‘’You don’t need so much before you can help someone in need, a little assistance which ever form will help meet the need of a mother and child’ he stated

The event which was held in Accra brought together dignitaries, humanitarians from Ghana and abroad.