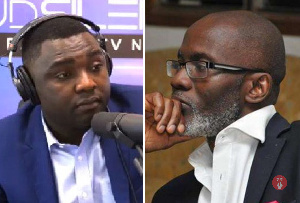 Social media commentator, Kevin Taylor has ridiculed a court charge of one million cedis against him for defamatory statements he made about Gabby Asare Otchere-Darko, a cousin to the President of Ghana, Nana Addo Dankwa Akufo-Addo.

Kevin Taylor has finally taken notice of the court writ served by Gabby Otchere-Darko through his lawyer but has responded with seeming broad satire.

Mr. Taylor posted a cheque of one million dollars on his Facebook timeline, October 28, in an attempt to say he is paying Gabby Otchere-Darko a million dollars not in cedis as notified in the court charges.

He also added that he has topped it up with a little quota to buy ”aids drug” for Gabby Otchere-Darko.

”Official I have sent a cheque to Gabby Asare Otchere-Darko. I added a little bit more for his aids drug. #focus”, he posted.

Previous NPP Nkoranza South Constituency Shake The Party With A Massive Health Walk
Next It’s Time To Over Desapair, Hopelessness, And Uncertainty Borne Out COVID-19