Home / GENERAL NEWS / [VIDEO]: The Yendi trouble was a big challenge for me – Kufuor 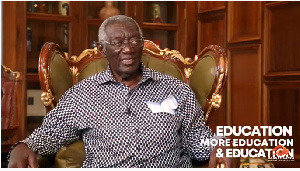 The second President of the fourth Republic of Ghana, John Agyekum Kufuor, has opened up on the biggest challenge in his two-term tenure as the head of state.

Kufuor, who led the New Patriotic Party as its flagbearer to break the dominance of the National Democratic Congress in the 2000 Presidential elections has said that dealing with the Yendi ‘trouble’ was the biggest hurdle for his government.

Recounting his worst leadership moment after 12 years of his presidency, John Agyekum Kufuor in an interview with Grace Yaa Agyemang on the Daakye Kanea podcast video, said the assassination of the then Yaa Naa and the succession dispute gave him the most headache as a President.

“The king was fine with me personally but under my watch, when that incident happened, I was not of balance seriously and to get a solution was a like lifetime challenge…because it happened during my second year as President,” he told Grace Yaa Agyemang on the Daakye Kanea podcast video monitored by GhanaWeb.

Yakubu II was killed at Yendi, the capital of Dagbon by supporters of the Abudu royal family when clashes broke out between the two feuding Gates of the Dagbon Kingship.

Watch Kufuor’s interview in the video below:

Previous Chadwick Boseman died without a will, wife files a probate case
Next Church Members Trapped Under Collapse Building At Akyem Batabi