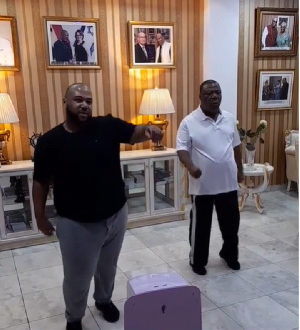 It was all over the media months ago, news about an apparent sour relationship between the renowned man of God, Archbishop Duncan-Willams and his son.

Series of messages posted on Daniel; his son’s social media pages, sparked discussions among many. He made very disparaging comments including suggestions of negative feelings towards same.

Subsequently, live videos emerged with him in a compromising sexual scene, there were reports of his unfortunate mental condition; bipolar and then a subsequent arrest by the police in the United States.

In all this, his father, still extended warm and affectionate messages, maintaining that prayers were most important, amidst his strong faith that the trial period will be over.

His son, after the uproar, apologized and proclaimed his unfounded love for his father.

The latest update on his social media page shows father and son, doing a workout routine together.

The two were in their workout clothes, being trained by a coach for their routines.

“Daddy said son join me for my personal training. I said pops I gotchu”, the post read.