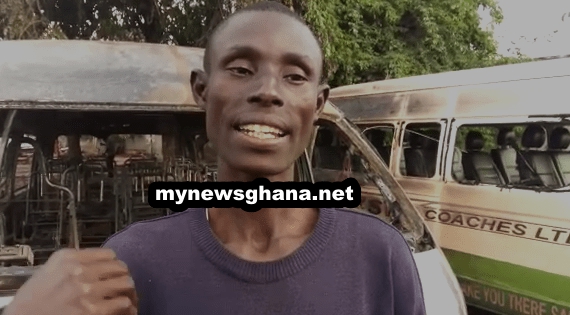 The driver of one of the STC buses that were burnt by alleged Western Togoland secessionists has spoken about what exactly happened when the mercenaries stormed the premises of the State Transport Company (STC) in Ho.

According to the driver identified as David Acheampong, he was sleeping in his car when he heard gunshots being fired.

He added that after a few gunshots were fired he started getting scared so he got out of his car and headed towards the main lorry station.

On reaching the gate, he met the gun-wielding men and begged them not to kill him.

“After a few minutes, another gunshot was fired. So I got out of the car and went to the entrance of the lorry station but it was at the gate that I met the people wielding the guns and firing warning shot. I begged them not to kill me. Then they moved to the security man after which I fled,” he said.

This morning, Ghanaians woe up to another attack by suspected Western Togoland Secessionists. The group attacked the State Transport Company (STC) bus station in Ho setting ablaze about four (4) of the buses.

The Municipal Chief Executive Officer for Ho Municipality, Prosper Bi-Pansah, reacting to the attack said that the group took them by surprise.

Reacting, he said, “So we went round those areas to educate them to get prepared and gave our numbers to them that they should call us immediately they see or suspect somebody but this STC Yard, we didn’t come here because we didn’t know that they would attacked the place. There is security patrols, the soldiers are patrolling the town. They might have moved from the station before the attackers came here.”