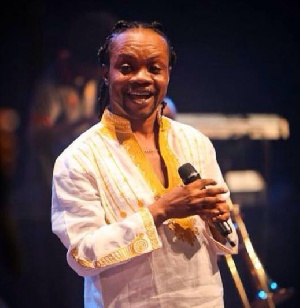 Veteran highlife musician Daddy Lumba is being celebrated by music enthusiasts as he chalks 56 years today.

Some fans of the legend have taken to social media platforms, particularly Twitter, to shower him with congratulatory messages while others have prayed for God’s blessings upon his life.

Persons who once took photographs with Lumba are flaunting them while others flood social media platforms with pictures from his performances.

Radio stations have not been left out of the celebrations as quite a number of them are playing his songs back to back.

A few personalities have been sighted uploading videos of themselves performing his songs.

Daddy Lumba is a multiple award-winning Ghanaian musician with a career spanning three decades. Charles Kwadwo Fosu as the musician is known in real life, was born on the 29th of September 1964 in a village called Nsuta Amangoase in the Sekyere Central District, near Mampong in Ashanti Region.

Lumba has over 30 albums to his credit. His catalogues include ‘Aben Wo Ha’, ‘Yene Wo Sere Kwa’ and ‘Enhyew’.

Comedians were forgotten during Year of Return festivities – DKB