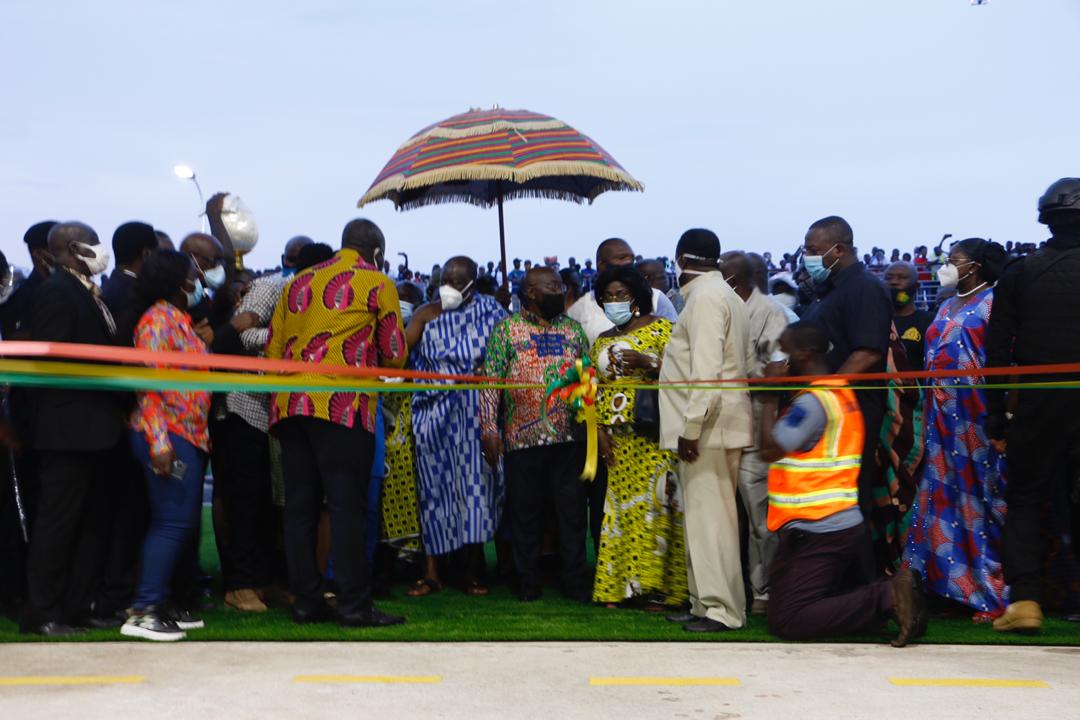 At a ceremony graced by the  Asantehene Otumfuo Osei Tutu, the plant, which will serve the entire region, was commissioned for work.

The Adagya, a town in the Bosomtwe district came alive with the presence of  government officials and the Ashanti kingdom.

The facility was financed by Dr. Joseph Siaw Agyepong  led Zoomlion Ghana in conjunction  with Hungarian  partners and Government’s supports.

It is expected to improve the sanitation situation in the region

“Filth was a major challenge in the Region, I am convinced that after this  commissioning, our challenges in Sanitation will be over,” he said.

“Ashanti Region will go back to its glory days.

He also thanked Honourable Cecelia Abena Dapaah, Sanitation Minister and the leadership of the church of Pentecost. traditional leaders,National Chief imam and the Ashanti regional chief Imam for their immense support throughout the journey.

“Mr President what you are witnessing today is the result of what you have in the private sector,” he said.

“Let me use this opportunity to commend former Presidents for their contributions in ensuring the Jospong Group succeeds.

“As you officially commission  this plant, more supports from your government will get private sector to strive.”

He also commended President Akufo-Addo for the bold decisions he took in the era of Covid-19.

He heaped praises on Otumfuo Osei Tutu II for also being part of the success of the Zoomlion story.

“My father Otumfuo Osei Tutu II’s advice has kept The Jospong Group in the country,” he said.

“You always wipe my tears anytime I come to you for advice.  Otumfuo thank you so much for being such a great father to me,”  Siaw Agyepong added.

“I  thank the Kwame Nkrumah University of Science and Technology(KNUST) for using the centre as research centre.”

He expressed his appreciation to Zenith Bank Ghana for giving the Jospong Group funding for the construction of the 5 kilometre road leading to the site.

The plant will absorb 1,200 metric tons of waste daily. The Facility will serve the districts in the Ashanti and adjoining communities.

Currently, 45,000 under Youth Employment Agency and Zoomlion workers are working for the Jospong Group.

The minister for Sanitation and water resources Cecelia Abena Dapaah thanked President Akufo-Addo, Otumfuo Osei Tutu II, Dr Joseph Siaw Agyepong and the staff of Jospong Group and the members of ESPA, clergy and the traditional leaders for gracing the event.

“Sanitation is part of the national drivers of the country’s economy. Sanitation is also important to the government hence the establishment of the ministry of Sanitation and water resources”. She added

She assured the Jospong Group of support from the government and her ministry to achieve their goals. We will continue to work with the private sector to achieve the clean Ghana campaign.

It will significantly contribute to the President Nana Akufo’s vision to make Ghana clean.

President Akufo-Addo addressing the media and the invited guest indicated that his government will support the private sector to achieve their mission.

According to the President, such projects and initiatives by any private individual is what his government is ever ready to support which aims at helping the country to grow.

President Nana Akufo added that, what the country is witnessing in terms of these waste treatment facilities being executed  by Zoomlion is the best thing in it’s commitment to better sanitation.

He used the opportunity to ask the Chiefs and people of the region to give him and his government another four more years to do more the the country.

“I’m happy for the residents of Adagya and I must commend the Jospong Group for the construction of the road,” he said.

“My government remains committed in ensuring the support to the private sector.

“This facility will enhance tourism in the area. I urge all stakeholders particularly the MMDCEs to collaborate with the operators of Jospong Group facility.”

He expressed gratitude to the Asantehene Otumfuo Osei Tutu II for his contributions to the Ashanti kingdom and the country.

Officials from the government, traditional leaders, the clergy and many other were at Adagya to witness the colourful event.

Related Topics:nana ADDO
Up Next