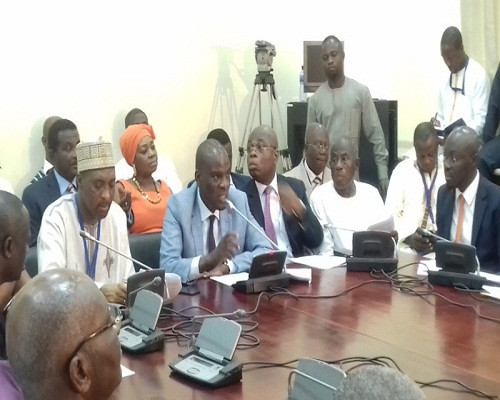 The Minority in Parliament has accused the Audit Service of breaching the law establishing Auditor General’s office by not submitting its 2019 report to Parliament, six months after the year ended.

They blame the situation on President Akufo-Addo’s decision to direct the AG, Daniel Domelevo to proceed on his accumulated leave.

Describing the situation as a sad one, Haruna Iddrisu reiterated that “we have cause to blame executive interference and intrusion that the said report for 2019 is not before parliament.”

Although the President, back in June, justified his actions with sections 20 (1) and 31 of the Labour Act, 2003 (Act 651), the decision received massive backlash from some members of the public including the Coalition of CSOs in the country.

The act, according to the Coalition, threatens the independence of the Auditor-General and downplays Ghana’s effort to fight corruption.

In the latest twist, Minority leader Haruna Iddrisu has alleged that the directive and subsequent inability to submit the report is part of the NPP government’s attempts to cover up corruption in the administration.

The Service under the supervision of Daniel Domelevo provided its report of the Auditor General for the 2018 financial year within the stipulated period. But the same cannot be said for this year in his absence, a development the MP finds suspicious.

“That is why you must understand when an overzealous President asks an Auditor General to go on leave, the consequence is that what he is required and obliged to do under the constitution – to submit the report on time to parliament – that constitutional right is held in breach,” he said.

According to the Tamale South MP, “this government is covering up to avoid the potential embarrassment of what will be revealed in the audited account of 2019.”

Auditor-General, Daniel Yao Domelevo in July argued that he been instructed to take his annual leave because his work is embarrassing the government.

In a letter to the Secretary to the president, Nana Asante Bediatuo, he said the decision to instruct him to go on leave was not taken in good faith.

But the Presidency has fought off the claims.

The Presidency asked Mr. Johnson Asiedu to act in Mr. Domelevo’s stead but the new appointments in the absence of the substantive boss raise questions about the state of affairs at the Service upon Mr. Domelevo’s resumption.

Another concern cited by a section of the public has to do with whether Mr. Akuamoah Asiedu will return to his original position of Deputy Auditor-General and whether or not Mr. Domelovo will return from his mandatory leave.

In August 2020, the Ghana Audit Service promoted Lawrence Ayagiba to the position of a new Deputy-Auditor General.

A circular signed by the office of the Acting Auditor-General Johnson Akuamoah Asiedu also indicated the appointment of Vera Quarshie as Assistant Auditor-General.