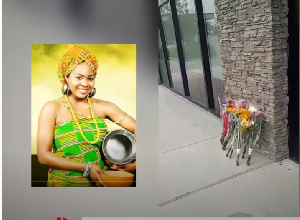 Father of the late Barbara Tommey, has finally spoken about the death of his daughter who was murdered by her husband in the United States of America on September 8, 2020,

According to Samson Tommey (Capt Rtd.), his late daughter did not deserve to depart from the earth in such a cruel manner.

He stated that the 27-year-old became a victim of someone with a wicked and hateful heart.

“Someone so meek and mild has become a victim. Brilliant life cut short for no tangible reason…There was really no need for anyone to stalk Barbara, hide around her office and gun her down. I don’t wish this for anyone. I insist that this is sheer cruelty to Barbara and is a very severe injury to the family, friends and loved ones”.

“I’m aware that devil came to kill, to steal and to destroy. I’m also aware that another trajectory of the devil is through wickedness. Wickedness manifested through hatred, jealousy etc. as described by the good books of God,” he said.

The Retired Captain of the Ghana Armed Forces spoke these while paying last respects at the burial service of his daughter at the Kingdom Church in Orlando, Florida Saturday, September 26, 2020.

The late Barbara Tommey was shot to death by her husband, Slyvester Ofori on Tuesday, September 8, 2020, outside the Navy Federal Credit Union branch in the United States of America where she worked.

According to Detective Matthew Rogers, Barbara Tommey and her husband, Sylvester Ofori were in a toxic relationship and were in the middle of a divorce before her demise.