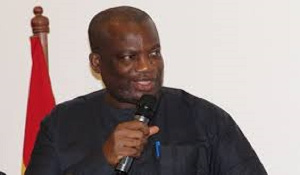 The Director of Electoral Services at the Electoral Commission, Ghana (EC), Dr Serebuor Quaicoe, has revealed that only 17,000 names of voters across the country are missing on the new electoral register as of the close of Friday, September 25.

The Commission had estimated that 60,000 names had been missing from the register.

Dr Quaicoe said on ‘The Key Points’ programme on TV3 Saturday, September 26 that the EC is working to address all the anomalies on the new register.

“I want to also put on record that when I left the office yesterday, Friday, September 25 at the national level, we are left with 17,000 missing names. So the whole country we are now around 17000,” he told show host Abena Tabi.

The main opposition party, the National Democratic Congress (NDC), had raised concerns that names of its members are missing on the electoral roll for the 2020 elections.

Its flagbearer, Mr John Mahama, at a press conference in Accra, chastised the EC for this development saying that he will not accept the results of a flawed election.

Speaking also on The Key Points, the IT Director of the NDC, Osei Kwame Griffiths, said it is normal with every voter register that some names will be missing.

However, the quantum of the missing figures with this particular one is what is creating a problem for the party.

“Some of these things normally happen during exhibitions because that is the essence of exhibition but then the volume with which they are occurring is frightening,” he said.

Meanwhile, Garry Nimako, a member of the New Patriotic Party (NPP) and private legal practitioner, said the NDC had no case in bastardising the EC because the very challenges they had raised have all been catered for by the electoral laws.

“If the EC had said your name has been deleted erroneously but we will not restore the names, then you can say the EC is now doing that deliberately but to say that the EC is removing the names of your members, how do you determine your members?

“Let’s even say that you go to Ashanti Region and you go to Asawase as they are saying, are you saying that everybody at Asawase is an NDC member?

“In 2016, NDC’s internal elections in Klottey Korley, they had several names deleted from voter register, one reason my client Nii Armah Ashitey had to take the matter to court over their own internal elections,” he said on the same show.

Related Topics:ECMISSING NAMES
Up Next