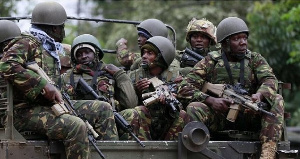 There is heavy security mounted at the Kpong power plant after a middle-aged man suspected to be a member of the separatist group, Homeland Study Group Foundation (HSGF), was arrested on Friday on the dam in Akuse.

The man is currently in the custody of the Akuse police after a flag believed to be that of the secessionist group was found on him as he was crossing the dam into Juapong.

The group that is fighting for the independence of ‘Western Togoland’, a part of Ghana which includes the entire of Volta region mounted giant signposts in Juapong in the North Tongu District of the Volta Region, on Friday September 25, welcoming people to what they call the “Western Togoland”.

They were reported to have attacked Police station in Juapong and captured three Police officers.

Reports indicated that there were also attempts to attack the Kpong Power Plant, a development that caused authorities to scale up security at the installation.

The Chief Security officer at the Volta River Authority (VRA) Thomas Mahama told journalists on Friday the men in uniform will be stationed at the facility for quite some time.

The arrested persons have been airlifted to Accra for interrogation. One person was killed during a clash with security operatives Friday morning.

The group alleged to be separatists, championing a secession agenda blocked entry points into to Volta Region, causing more than five hours of gridlock along the Adomi -Juapong – Akosombo stretch.

The group is fighting for the independence of ‘Western Togoland’, a part of Ghana which includes the entire of Volta region.

They are reported to have burnt car tyres and forcibly removed commuters from vehicles that were locked up due to the confrontations.

However, a joint security deployment of police and military personnel from Accra and Ho moved in to deal with the situation.

One person was shot dead during the fracas between security operatives and some town folk.

Youth president for the Juapong community, Bright Aryetey, said the residents should not be made to pay for the sins of the Homeland Study Group.

He condemned the actions of the group while stressing the need for thorough probe into the matter.

Family of the deceased, 26-year-old Emmanuel Kale says the security personnel must explain why they killed their kinsman.