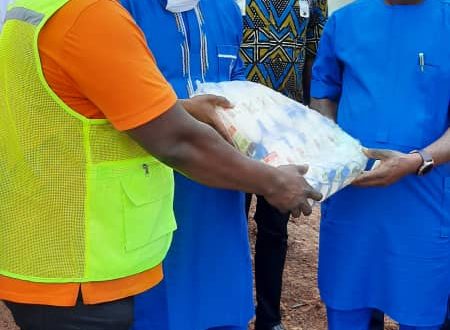 The Volta River Authority (VRA) has made yet another donation of food items to the NADMO in the North East Region.

The items which is include; Rice, Cooking Oil, Milk, Suger, etc. were presented by Mr. Osman Ayuba the Managing Director of the North Electricity Company (NEDCO) on behalf of the Chief Executive of VRA Engineer Emmanuel Antwi Darkwa at Nalerugu, the North East Regional Capital.

The donation were received by Hon. Soloman Boar the Member of Parliament for Bunkprugu who doubles as the North East Regional Minister and were subsequently presented to the Regional NADMO Officials for distribution to the flood victims in the region.

The Country’s Power Generation Company’s donation to the flood victims in both Upper East and North East forms part of the organisation’s  Corporate Social Responsibility especially in its operational areas the country.

VRA is the key Government Implementating Agency for the Pwalugu Multi-Purpose Dam Project which is currently under construction in both North East and Upper East Regions of Ghana.