Home / GENERAL NEWS / How Anlos got their name 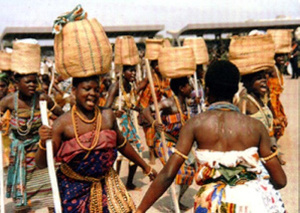 Every ethnic group has subs and every one of them come with names.

These names have a history behind them and it is not very different with the Anlo sub-group of the Ewe ethnic group.

Historian and Spokesperson to the Awoemefia of the Anlo State, Togbi Sri explained this when he took his turn on GhanaWeb’s ‘People and Places’ show.

According to Togbi Kumassah, the name emerged from the leader and founder of the Anlo Kingdom, Amega Wenya.

After their escape from the then king of Notsie, King Agorkoli I, they travelled through certain places before finally settling at what is now the capital of the Anlo State; Anloga.

It was here that he told his people he could not continue the journey with them because he was old and bent, which in Ewe would be said as ‘Me-nlo’.

“Amega Wenya was the leader of the migrating Anlo people. They moved from Kedji to Keta to Tegbi then they went to Dudu before finally going to Anloga.

Togbi however explained that oral history has presented another version, one that traces their routes back to the ancient scribes of the Hebrews.

“Another meaning to ‘nlo’ is write. It was believed that the scribes of the ancient Hebrews were the Anlo people; this also has two versions,” he concluded.

Previous Families run for buried relatives as chief reclaims cemetery land
Next TikTok and WeChat: US to ban app downloads in 48 hours