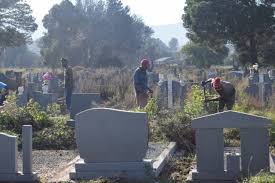 Families in Diabene, a suburb of Kojokrom within the Sekondi-Takoradi Metropolis, were sighted rushing to the Diabene Community Cemetery to collect the remains of their already buried relatives for reburial.

The incident which occurred Thursday afternoon, was due to the decision of the chief and queen mother to reclaim portions of the cemetery for a football field for the youth.

The Queen mother of Diabene, Nana Aba Esson (II), said that, “this is not an impromptu activity. For the past two weeks, we have sent the town crier out to announce our decision to the people, so no one can claim they are unaware”.

She refuted claims that people were uninformed saying that perhaps those persons don’t live in the town and their resident relatives may have failed to notify them ahead of the reclamation exercise.

Nana Aba Esson (II) further revealed that before anyone is buried in the cemetery, relations of the deceased inform the palace for the chief’s linguist to apportion a burial place for them within the community cemetery.

Further checks by Angelonline.com indicate that the exercise was led by the Chief and Queen-mother of Diabene with the help of the Sekondi-Takoradi Metropolitan Assembly’s Environmental Health Department, who supervised the exhumation.

The part of the cemetery being reclaimed would create larger space for expansion works on a football field for the youth in the community.

On arrival at the cemetery, a backhoe machine was seen breaking tombs and exhuming coffins within the demarcated area while family members also rushed to the scene to collect the remains of their deceased relatives.