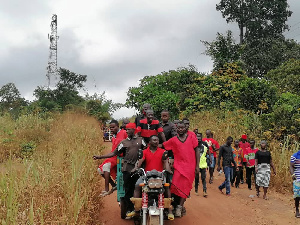 Angry residents of Jacobu in the Amansie Central District of the Ashanti Region, on Tuesday, September 15, stormed a cemetery in the community to protest the lack of development in the district.

Personnel from the Odotobri Police Command earlier prevented the group calling itself Concerned Youth of Odotobri Constituency, from demonstrating in the community as it would amount to violating the Covid-19 protocols.

This was after the residents besieged the streets of the town as part of a planned news conference over the alleged lack of development in the district.

Over 200 residents led by Joseph Amoah popularly known as Bashy, subsequently streamed into the Jacobu cemetery to hold their protest.

Expressing their grievances to some journalists who followed them, the residents accused their representative in Parliament, Emmanuel Akwasi Gyamfi, for lack of development in the community.Jacobu residents according to the leader of the group, the “Odotobri [Constituency] is a stronghold for the governing New Patriotic Party (NPP) but we have been neglected in terms of development when President Akuffo-Addo and the NPP came into power.”

“Our MP, Emmanuel Akwasi Gyamfi is our nightmare. 16 years in Parliament as MP for Odotobri, his incompetent leadership is affecting the development of Odotobri Constituency. He cannot even lobby for the public as an MP,” Amoah alleged.Jacobu residentsHe listed the absence of good roads, a first-class hospital for effective health care and a host of others as some of the key developmental issues affecting the district.

He said “Though the delegates voted for our MP, Emmanuel Akwasi Gyamfi to lead the constituency, majority of the youth are calling for change. He has performed abysmally for 16 years in Parliament.”

“We are charging the leadership of NPP to allow us to choose an Independent Candidate or forget our votes in the coming general elections in December. We will vote ‘skirt and blouse’ or we will vote massively for NDC [National Democratic Congress]. We are tired of the incompetent MP, Emmanuel Akwasi Gyamfi,” he stated.

Meanwhile, the residents have given the government and the NPP leadership a 72-hour ultimatum to address their concerns or face their wrath.

Govt to give update on National Unemployment Insurance Scheme today