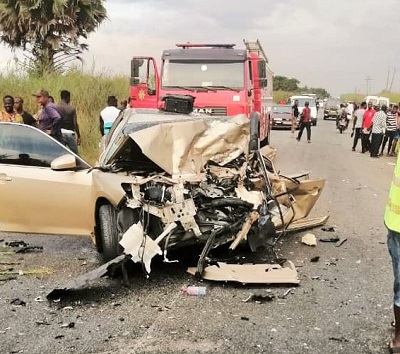 Five persons, including one woman, perished in a gory accident involving three cars and a motorcycle at Kpetoe, in the Volta Region, on Saturday.

The incident occurred at about 3:30 pm at Young Farmers, a spot near the Agotime Ziope Assembly office building when a Toyota hiring car, GW 1143 -10, moving towards the Aflao direction was overtaking a vehicle in front of it and in the process rammed into an unregistered Toyota Camry, from the opposite direction.

That caused another vehicle, a Toyota Brilliance, GT 1987-1 and the motorcycle, M-09-GW 68, to also run into the distressed vehicles.

He said that four other persons who sustained various injuries were rushed to the Ho Teaching Hospital.

The bodies of the deceased are also at the mortuary at the same facility.

Corporal Dogbatse said the driver of the Toyota Corolla, whose name he gave only as Edo was among the deceased.

He said that the driver of Toyota Brilliance, Richard Makafui Negble was helping the police in their investigations.

The identities of the other deceased persons were not established at the time of filing this report.

However, some locals identified one of the deceased as a Ho-based mobile money operator with a kiosk opposite the Ho Municipal Hospital.

Govt to give update on National Unemployment Insurance Scheme today