Derek Sekyere and Kofi Junior, aged six and nine respectively, have lost their lives after falling into an abandoned pit at Obuasi Ahansoyewudea in the Obuasi East District in the Ashanti region.

The sad incident is reported to have happened on Friday, August 7, around 6:pm.

According to checks by Adom News reporter, Isaac Normenyo, the abandoned pit is to be used for the construction of a fuel station in the area, but due to inadequate funds, work on the project has stalled.

The two children, after being rescued by some residents and police officers, were sent to the Anglogold Ashanti Hospital but were later confirmed dead.

Vincent Kwesi Donkor, Assembly Member for Ahansoyewudea, speaking to Adom News, urged the contractor of the fuel station to quickly come and cover the pit to prevent further deaths.

Previous Video: Adebayor Arrives In Ghana, Spotted Partying With Stonebwoy As They Jam Massively To His Putuu Song
Next GES apologises for a ‘big’ mistake 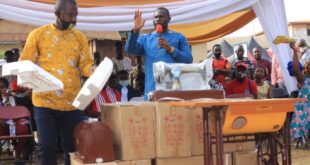