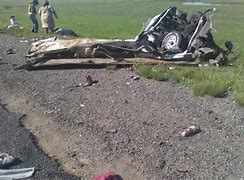 Five people were killed while one sustained critical injuries after a car collided head on with a bakkie on the R512, near Lanseria airport on Friday.

According paramedics, the accident happened around 07:07 in the morning.

“Five patients from the car had sustained fatal injuries and were declared deceased on the scene,” Netcare 911 Shawn Herbst said.

VIDEO: Most of the boys going to Benin for ‘Blood Money’ will die – prophet reveals