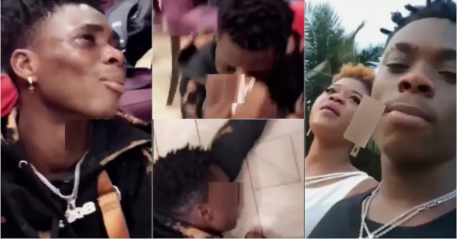 In the new video, a young man is weeping uncontrollably after his lover reportedly left him

A young Ghanaian man has become the subject of social media interest after a video of him weeping uncontrollably popped up online.

The young man’s tears, are a result of him suffering from heartbreak following a breakup from his girlfriend. In the video, the young guy and his now ex-girlfriend are seen having fun together when everything was okay between them.

From riding in cars, going to nightclubs, hanging out on the beach, and chilling at home, the young man and his lady seemed like a perfect couple.

However, in the tail end of the video, the young man is seen lying on the floor, crying. Some friends can be heard asking him what is wrong while they try to get him off the floor.

Funnily, the guy who speaks Fante responds with, “Waa gyaaa mooo.” which translates to “She has left me oo.”

His response and demeanour led to a burst of laughter from his friends who sounded surprised by their friend’s behaviour. Still laughing, the friends force him off the floor with one shouting “heerhh Joe B!”

The video has been circulating quickly since emerging on social media on 28 June. The guy’s story comes not long after that of Sammy, a KNUST student who also wept bitterly after his girlfriend called Nana Ama dumped him.